’Limboland’ is a story about three very different women in their mid-twenties, Freja (Frederikke Dahl Hansen), Katrine (Emma Sehested Høeg), and Nadja (Angela Bundalovic), who reunite at their highschool-reunion. They are all struggling to create and live out their identities, and they quickly become entangled in lies and intrigues. The series is created by writer, producer, and director Rikke Louise Schjødt and is inspired by her own experiences of having to reinvent herself after returning to Denmark from New York in her mid-twenties.

The first season of ‘Limboland’ was very well received, and now the second season will be released at Xee in the spring of 2021. In this season the limbo of the twenties continues, while the three young women each attempt to maintain their idealistic self-images. In Limboland II we will meet new characters, played by Paprika Steen and Cyron Melville among others, who push the girls to their limits, and their insecurities and secrets will now have consequences. 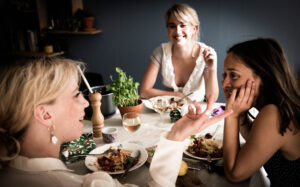 Watch here: will be broadcasted by Xee
Read more: ritzau.dk