Sara Namer is a Danish producer. Sara graduated from The National Film School in 2009 and has since then worked for Nimbus Film, Zentropa, Meta Film, and Nordisk Film amongst others. She joined SAM in May 2019 and comes from a position as a teacher at the National Film School working with the producer’s program. Sara has produced feature films, including ‘I dine hænder’ (in English: ‘In Your Hands’) and ‘Til vi falder’ (‘Till We Fall’). 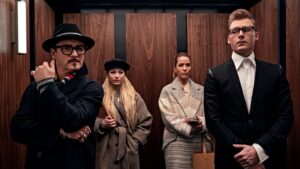